Why Is Temple Marriage Important? 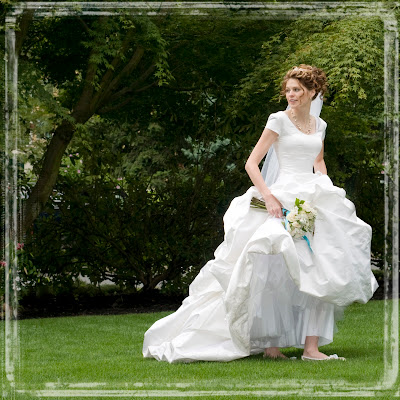 Ah, yes.  Hello best day of my life!  August 2nd, 2008:  The day we were married and sealed in the temple.  This lesson makes me so happy.  Of all the things we're taught we're supposed to do in the gospel, this one seems to be the top-dog, number one no-brainer to me.  I love my husband SO MUCH!    Of course I want to spend ETERNITY with him!  It is so comforting knowing that if anything ever happens to either of us, we never truly have to say goodbye.  We can always be together.  I can't imagine living without that comfort and knowledge.  I am so grateful for temples and family sealings! 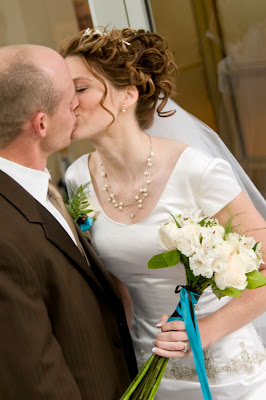 For our fifth anniversary I made Mitchell a home movie collage of our marriage.  I might have to tame it down a little more if I want to show it at church, but here's our anniversary video...

I love Elder Nelson's Celestial Marriage talk where he describes "the patterns of a shopper."

Wise shoppers study their options thoroughly before they make a selection. They focus primarily on the quality and durability of a desired product. They want the very best. In contrast, some shoppers look for bargains, and others may splurge, only to learn later—much to their dismay—that their choice did not endure well.  A couple in love can choose a marriage of the highest quality or a lesser type that will not endure..”

"One good yardstick as to whether a person might be the right one for you is this: In (their) presence, do you think your noblest thoughts, do you aspire to your finest deeds, do you wish you were better than you are?"
-Ezra Taft Benson

WHAT KIND OF MAN DO YOU WANT TO MARRY?
I found this cutie idea on sugardoodle where you buy a bunch of candy bars and have each girl choose one.  Each bar represents a different personally/character trait and it makes a fun game where the girls can "choose an eternal companion."

Oh Henry!--He's nice, honest, but forgetful. He prefers to watch TV rather than have Family Home Evening. He's not very committed to the Church. If he stays up late on Saturday, he doesn't mind missing Church, but he will go at least half of the time and take the kids to activities and chaperone dances. He married you in the temple, but you haven't been there together in several years.

MARS Bar--He's a rocket scientist, really. He loves physics and math. He's also kind of a nut. He's got a quirky sense of humor that not everyone understands, but you like it. He likes camping with the Cub Scouts and loves to design Pinewood Derby cars. He also teaches Gospel Doctrine and seems to know everything about Church History. He has to work late on Friday nights sometimes, but he always makes it up to you. You married in the temple and attend about every other month.

Mamba--this guy was on the BYU ballroom dance team and is a terrific dancer. You go dancing every week. He likes having group parties at your house. He is spontaneous and fun. Sometimes he surprises you by bringing home people for dinner without giving much warning, if any. He is a great father and takes his kids on outings with Dad once a month or so. He isn't that great at paying bills, going grocery shopping, or balancing the checkbook, so you learned to do that. He has a sincere testimony of the Gospel and you got married in the temple.

Lifesavers--This man is a lifeguard. He has a great body, a great tan, a great smile, and a helpful personality. He also is a wonderful home teacher and missionary. He has shared the Gospel with many of his friends. So far, 30 have joined the Church. He has a very strong testimony of the truthfulness of the Gospel and it is visible in everything he does. You met him when you were out dancing with your friends. He saw that you weren't having much fun dancing with the man who kept asking you to dance, and realized you were too nice to tell him no. So he stepped in and asked you for the next slow song. You had a lot in common and felt totally comfortable with each other, in an exciting sort of way. When you returned to your friends, you were almost out of breath and deliriously happy. You exchanged phone numbers, dated for 8 months, met each other's families and got engaged. Of course, you got married in your favorite temple. Four children later, you are still madly in love and very happy.


Or, instead of candy bars, you can go through Book of Mormon characters.  This idea came again from sugardoodle, and pictures came from Book of Mormon Battles. 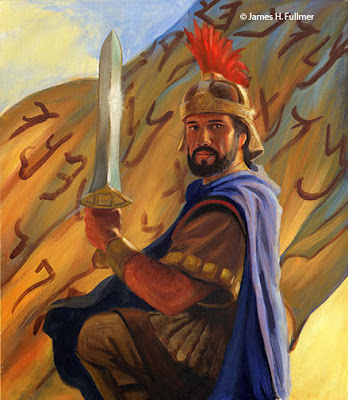 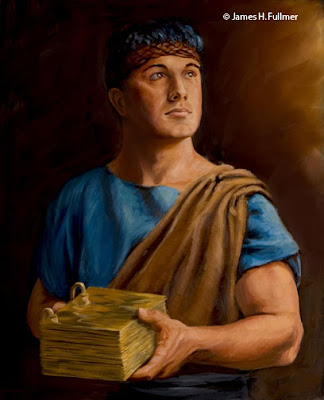 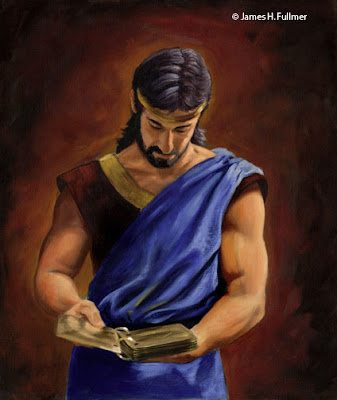 Faith in God, loves children even when they go astray, endures to the end, fasts and prays, wise, and intelligent. 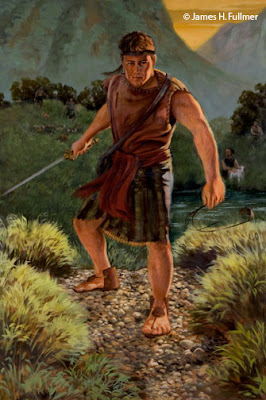 Missionary spirit, faithful in all things, humble, tends flocks and herds, and can grow food.