Why Do I Need To Forgive Others? 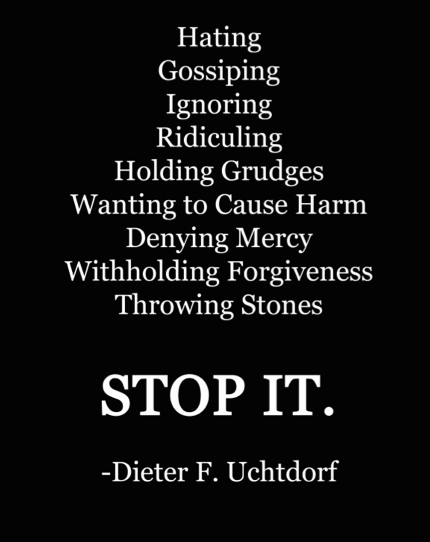 I have an extreme "conflict avoidance" personality.  It's a little bit ridiculous and a lot a bit annoying to my husband and other people.  My go-to response for just about every situation is always the same, "Oh, I'm fine doing whatever makes everyone else happy."  I hate-hate-HATE conflict.  If I am in the same room as two people who are arguing I go into panic mode.  My palms start sweating, my heart starts racing and I must find a way out of that room IMMEDIATELY. 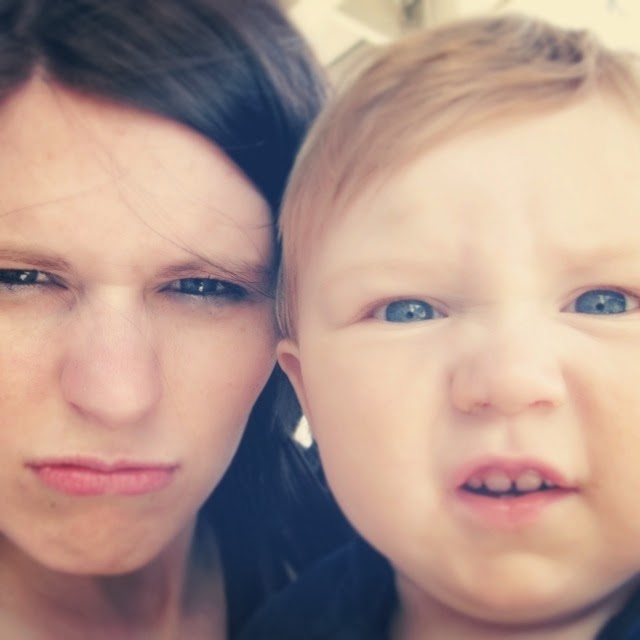 GRUMPY FACES WITH MY NEPHEW JOSH

Because of this trait growing up I avoided drama and didn't get into many fights with my friends or peers.  Which is a good thing... Except when I grew up and had to face confrontation with other adults I didn't know how to handle it.  And I realized I had a very hard time forgiving others because I never had to deal with it when I was younger.
One situation especially sticks out in my mind where a person truly hurt me.  It was one of my most difficult trials trying to learn to love and forgive this individual, but I now am so grateful for that experience.  I know that person came into my life to help teach me how to forgive.
Looking back, I came up with a list of things that helped me learn how to forgive.

The last step REALLY helped me.  While I was on my knees in prayer asking for strength to forgive this individual a memory flashed through my mind.  My little brother and I were fighting over something childish.  I remember my mom telling us, "Kids, please stop fighting.  It makes me sad when you don't get along."  I could picture the genuine unhappiness in my mother's eyes and felt guilty knowing I was causing her sadness.  My perception shifted from my childhood to my current situation.  I loved my Heavenly Father so much and it killed me inside thinking I was disappointing Him.  Whatever negative feelings I felt towards this person immediately dissolved within me.  The only thing that mattered anymore was making my Heavenly Father proud and happy.  I knew He loved me and He loved this other individual equally.  If I could dropped this grudge I felt, it was one less worry for my Father in Heaven.  I felt so great afterwards!

To start this lesson, I think the girls should think about or write down on a small piece of paper the name of someone they have a hard time getting along with.  It's not to share with anyone around them, just for each girl personally.  At the end of the lesson, a great challenge could be for the girls to forgive that specific person they wrote down on their paper.

Hand the girls the following questions and discuss the answers while reading
D&C 64:9-11. 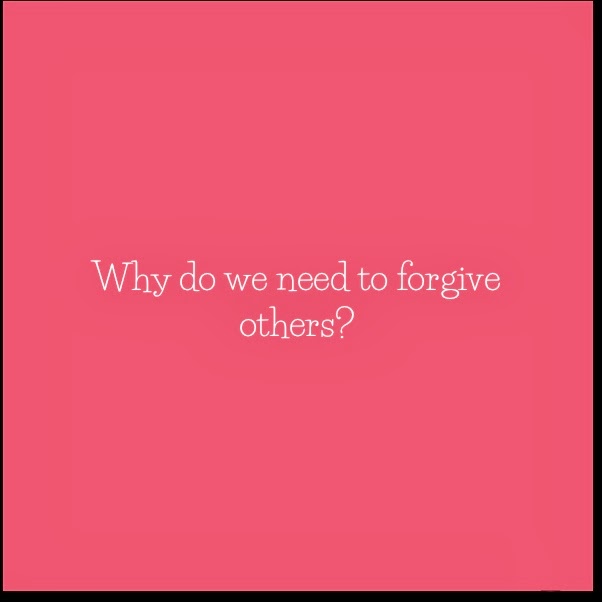 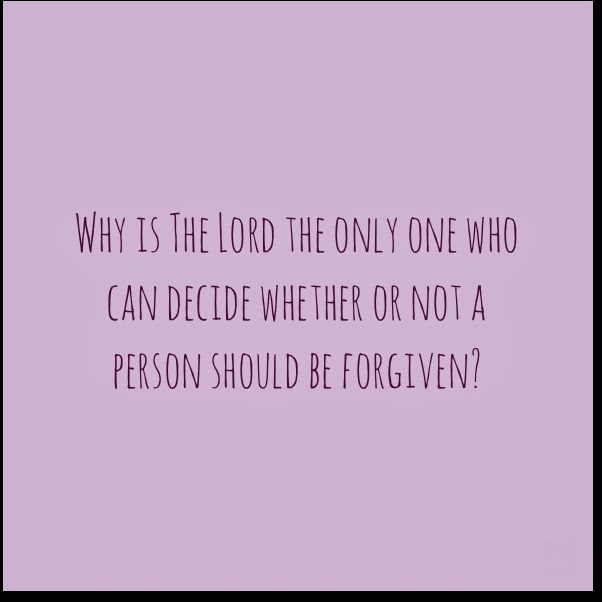 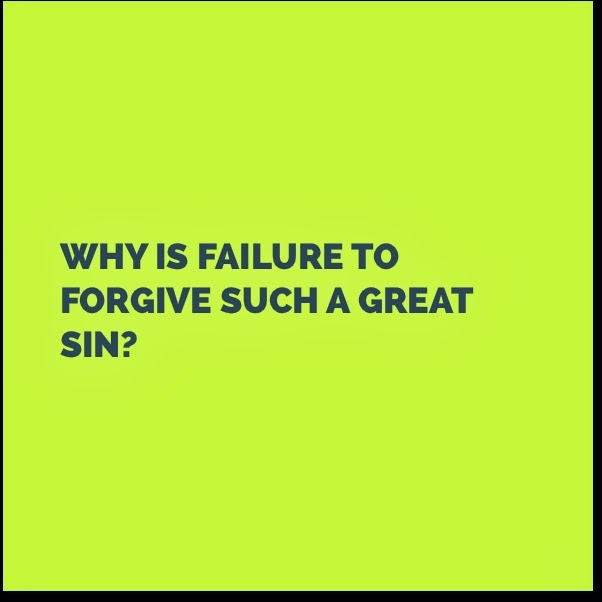 I know I've already shared this story in my Repentance lesson, but I have to share it again.  It's a wonderful way to look at why we must also forgive OURSELVES after we have sinned and experience the repentance process
WHICH CAN BE REALLY HARD TO DO!

The Duck and the Devil
There was a little boy visiting his grandparents on their farm.  He was given a slingshot to play with out in the woods.  He practiced in the woods, but he could never hit the target.  Getting a little discouraged, he headed back for dinner.  As he was walking back he saw Grandma's pet duck.

Just out of impulse, he let the slingshot fly, hit the duck square in the head, and killed it.  He was shocked and grieved.
In a panic, he hid the dead duck in the wood pile, only to see his sister watching!  Sally had seen it all, but she said nothing.
After lunch the next day Grandma said, "Sally, let's wash the dishes."  But Sally said, "Grandma, Johnny told me he wanted to help in the kitchen."  Then she whispered to him, "Remember the duck?"  So Johnny did the dishes.
Later that day, Grandpa asked if the children wanted to go fishing and Grandma said, "I'm sorry but I need Sally to help make supper."  Sally just smiled and said," Well that's all right because Johnny told me he wanted to help."  She whispered again, "Remember the duck?"  So Sally went fishing and Johnny stayed to help.
After several days of Johnny doing both his chores and Sally's... he finally couldn't stand it any longer.
He came to Grandma and confessed that he had killed the duck.  Grandma knelt down, gave him a hug, and said, "Sweetheart, I know. You see, I was standing at the window and I saw the whole thing, but because I love you, I forgave you.  I was just wondering how long you would let Sally make a slave of you."
Thought for the day and every day thereafter?
Whatever is in your past, whatever you have done... and the devil keeps throwing it up in your face (lying, cheating, debt, fear, bad habits, hatred, anger, bitterness, etc.)  ..whatever it is....You need to know that God was standing at the window and He saw the whole thing.....  He has  seen your whole life. He wants you to know that He loves you and that you are forgiven.
He's just wondering how long you will let the devil make a slave of you.  The great thing about God is that when you ask for forgiveness, He not only forgives you, but He forgets.....  It is by God's grace and mercy that we are saved.   God is at the window.

For the MATHERS*:
The parable refers to “ten thousand talents” (verse 24) and “an hundred pence” (verse 28). “During the first century A.D., it is estimated that 10,000 talents equaled 100,000,000 denarii. One denarius was a typical day’s wage for a common laborer. If that laborer worked three hundred days a year, it would take about 33 years for him to be able to purchaseone talent. And it would take over 300,000 years to earn 10,000 talents, the sum of the servant’s debt” (Jay A. Parry and Donald W. Parry,Understanding the Parables of Jesus Christ [2006], 95). By comparison, the 100 pence owed by the fellow servant is about one million times less than the debt owed by the first servant.

Email ThisBlogThis!Share to TwitterShare to FacebookShare to Pinterest
Labels: Forgiveness